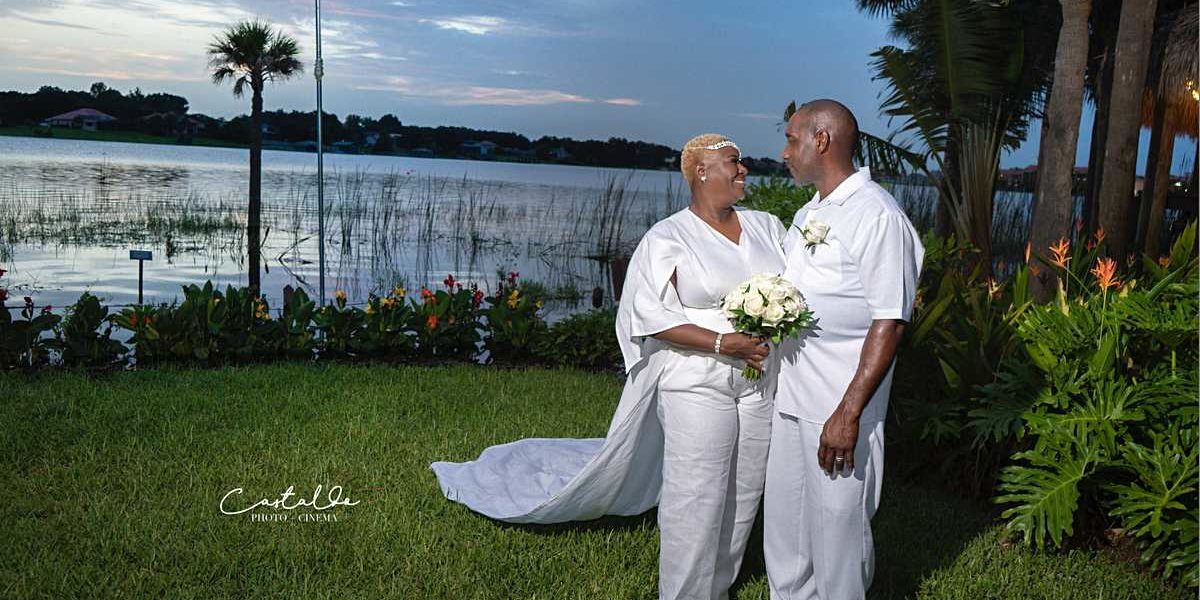 Sunset Key Island is part of the magnificent Westgate Lakes Resort in Orlando, Florida. The island sits at the end of a long boardwalk and is positioned in the gorgeous Little Sand Lake. It features a Tiki Hut built by local Seminole Indian craftsmen, and it is just plain gorgeous.

Crystal and Robert brought their intimate group of 30-friends and family members to the island to celebrate their 15-year anniversary. They worked with officiant Lon Tosi of Sensational Ceremonies to create a special ceremony that brought their deep love for one another to life. The love that day was palpable. The arch and the seats were decorated by many members of the family. They took such great care to make certain that everything was just “right”! Everything had to be perfect! Lon and most members of the group wore white out of respect for the couple’s wishes. Crystal’s bouquet was white, and so was her gown. The mood was elegant, and warm and happy.

They had a “praise dance” just after their vows that was spell binding. A beautiful young lady from their church danced a gorgeous routine that involved, at the end, bringing their hands together symbolizing their unity and hopes for the future. It was simply memorable!

Domenico Castaldo from Castaldo Studio of Orlando was on hand to photograph the moments as they unfolded. The resulting photos are amazing and just beautiful.

The couple spent the evening at a restaurant on site at Westgate Lakes. Then they planned to spend time at the local parks including Walt Disney World Resort, Orlando and Universal Orlando Resort.

We we wish you much luck with your marriage into the future Crystal and Robert. You have such a great cast of supporters. Make the next 15-years work just as the last 15-years did.

And it all happened on a magnificent island, with a gorgeous sunset, in Orlando, Florida!

Lon Tosi is a successful wedding officiant serving the Central Florida and Orlando area. He has conducted thousands of ceremonies over a decade of service. Lon works with each couple to create a custom wedding document that actually speaks of their story. He always requests that they write special words to one another, that he will read for them. The ceremonies are peppered with readings that they select. As a Florida Notary, he conducts weddings of both a religious and non-religious nature. He also serves as Vice President of Business for Sensational Ceremonies the largest officiating company in North America.  Lon is an award-winning officiant. There are numerous videos of his work on the internet for your viewing pleasure.